Walking into the studio of David Hart was surreal. It was very neat and ordered and there were pigeon holes for every category of artwork, but his paint-splattered shoes gave away some secrets of an artist in his element.

The vibrant colours of his famous flower and dragonfly paintings captured my attention, as well as the paintings depicting the Australian bush that reflect David’s home town of Broken Hill, of which he has many fond memories.

“Growing up was awesome,” says David. “We’d get home after school, grab a sandwich in one hand and our helmets in the other and head off into the bush.”

Between spending afternoons dirt bike riding for hours on end with his brother, or hanging out with his dad in the studio, life was never dull. David’s memories of his dad, Pro Hart, were fond ones. He tells how his dad would always be making, painting or creating something in his back shed.

“Dad was very prolific, he could just paint all day and paint lots of things,” says David.

Unbeknownst to David, this environment became David’s life-school of art. He would often head out to the studio to have a chat with his dad, who would be busily painting, sculpting, welding, or moulding one creation after another.

“Dad never gave us formal art lessons, in fact, he never asked us to sit while he showed us how to make pottery or how to paint. We just learnt it from watching him and making things along side of him.”

He recalls how Pro had a truck arrive at his acreage in Broken Hill. The truck dumped about 30 tons of scrap metal into a pile in the back yard. David would scavenge through and gather bits that he could put together to create something.

David never studied at an art school and doesn’t remember high school art classes, he just knew what he needed to do. It was all just a way of life for the Hart family, almost as natural as breathing.

As a teenager, David worked in the studios making picture frames. When he was about 16, he realised that, what he actually had was a talent and began pursuing his painting seriously.

“I think you’ve really just got to recognise what the calling is on your life,” says David, “sometimes it takes a little while to find it. A lot of people go searching for their purpose but it’s there all the time. You’ve just got to look at the gifts that are on your life that are recognisable in the little things that you do. The sooner you recognise those things, the sooner you can maximise what you were put on the planet to do.”

David also met the love of his life when he was 16. Christine was working for his Dad as assistant manager and David was working in the studio. They later married and became Youth Pastors at the local church while running the art studio in Broken Hill. Eventually they moved to Brisbane to help out a church. David painted on the side and made a few sales through galleries. He gradually expanded on this as sales picked up.

These days, David and his family reside on the Sunshine Coast. David has two galleries, one at Noosa and the other at Mooloolaba, but spends most of his time in the studio painting.

The ‘birth of a painting’ as David explains it, is a difficult process. There is a journey that is taken and at points along the way, paintings can look all wrong, as if they are not going to work. It is through enduring until the end that you are presented with the completed picture and at that point you realise it was all worth it.

“You have to just keep pushing through and all of a sudden it comes to life and it’s finished. It’s like a labour and something great’s been birthed from the trial.”

Much like life. For David, as for most people, there have been times when he has wondered if the calling upon his life is art and if he is really meant to do this. Despite the fact that his talent is obvious to all who view his artwork, he admits that he has struggled with moments of doubt.

“I’ve been painting for 20 years and some days I still have moments when I say oh man, am I any good at this?”

David has tested and pushed through these momenta only to affirm with confidence that he is, in fact, doing what he was put on the earth to do.

The last five years have been the toughest of his life. The Global Financial Crisis hit hard and paintings were a luxury that people didn’t need to survive, so the art industry suffered.

“I’ve had to literally re-invent myself to survive,” says David. “If we hadn’t done that we would’ve gone out of business like so many other businesses that suffered during that time. We had to dig deep and trust God.”

He is grateful to be on the other side of that season now and confesses that it has made him a stronger person.

Things are certainly looking brighter these days. David Hart has recently returned from a tour with The Lord Mayor of Brisbane to meet with government officials throughout Asia. It was a fantastic opportunity for him to meet with and have his artwork presented to many dignitaries. This was an opportunity he had not dreamed of but an open door he met with much gratefulness.

His latest project is the completion of a collection of paintings depicting the story of the first fleet through the eyes of the Indigenous people. With each painting taking 75-100 hours to complete, this collection of 48 paintings has been a monumental feat.

“To be honest I don’t think that anything should ever be really easy and I don’t know if that’s the path that God wants you to take either.”

David has a genuine heart to present the truth and, in order to portray a balanced view in his paintings, he has repainted the collection three times. He has also spent hundreds of hours researching history books, meeting with Indigenous people and walking through their stories with them in order to better understand the journeys they have taken.

“I’m trying to show people something that they may not have realised. I’m hoping it will produce a different attitude towards Indigenous people and what they’ve had to go through.”

Now, on the other side of endless hours of research and re-painting, the final result is impressive to say the least. David hopes to tour these paintings throughout rural Australia. His plan is not to sell them but he has painted them with the hope that people will visit the galleries and leave with a new perception and understanding of our land, our people and our heritage.

“It’s a great point of learning of what not to do to your fellow man and what you should do. A lot of this I didn’t understand and I had no idea about until I really started to talk to indigenous people and read their history books.”

One thing David has come to understand throughout life’s challenges is that the difficult seasons are generally more important and impacting than the times in life that seem to sail.

“Don’t wish your way out of a season,” David advises. “Even though this has been the worst season for us, I thank God for it.”

David says that the man he is today is a lot better than the man he was seven years ago. The trials that they have endured together have made them stronger – stronger in their relationships with each other and stronger in their relationship with God. He has come to realise that he can’t fix everything, only God can do that and only in his timing and when he does, you realise it was well worth the journey.

“I wouldn’t have what I have now without the hardness of this season,” says David, “and believe me it has been hard.”

My lingering thoughts as I left this interview, were that this is a man who has felt the sting of tragedy, who has felt the pangs of self-doubt, who has endured trials that seemed impossible but, with God’s help, has broken through and enjoyed the triumph that comes with perseverance.

Before I left, I challenged David to a stick-figure challenge. We both had one minute to draw a stick figure of any kind. Bold, I know, but I couldn’t resist! See if you can spot which is David’s masterpiece? I wonder if you can… 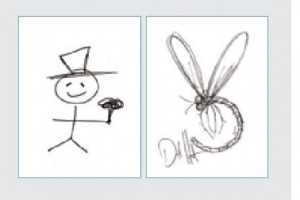