It’s the Word that Makes the Difference

Rock n roll stages and newspaper pages – there’s not a lot of difference between the hearts of writers and brothers Peter and Mark Furler.

Entering the Furler household is like receiving a warm hug. Their puppy yaps with excitement and Julie usually has the jug boiling ready for a cup of coffee to accompany a good chat. Just recently the family celebrated as Mark, Julie’s husband, was named APN News and Media’s Australian Editor of the Year.

Mark has been delivering the news to the Sunshine Coast for more than 25 years. With a father who has published some books about his adventures as a missionary, a sister who writes poetry and another sister who has written a biography, his love for writing seems to have been born in him. Becoming dux of his school gave Mark the opportunity to pursue the profession of his choice. His great love of writing and heart to fight for justice in society lead him into the pathway of journalism.

“When you see things that are wrong in society,” says Mark, “you can tell people’s stories and see them change, that’s the ultimate for a journalist. You see the result of what you do. You see laws change; you see things exposed that should never have happened”.

When Daniel Morcombe went missing in December 2003 Mark was there with The Sunshine Coast Daily. They started the campaign where people put red ribbons on their letter boxes in remembrance of Daniel until he was found. Mark spent a lot of time getting to know the Morcombes and was able to walk alongside of them to help give them a voice during this most tragic time of their lives. The Daily was able to bring awareness to the community on child safety matters as well as of the dangers that lurk on our streets.

When Daniel was found and his body laid to rest in December of 2012, people sent in their red ribbons to Denise Morcombe who was very touched by this. She has publicly praised the Sunshine Coast Daily for their involvement in the search for Daniel.

“Families are appreciative,” he says, “they’re going through the most terrible circumstances that anyone can imagine and you’re there as their voice to the rest of the community. That’s when media can be useful.”

Mark also admits that there are ugly sides of the media. “The media gets a bad rap generally,” he told me, “Most journalists are there for the right reason. Some of them get swayed into the wrong path where it becomes more about them rather than the story, but 80-90% of journalists have chosen this career because of what they believe. Their aim is to make a difference and that’s how you make a difference.”

With such a creative family, it is no wonder that Mark’s older brother Peter also found his way in the world through writing, but this time in the form of songwriting. Peter Furler is the founder, drummer and former lead singer of the Christian Rock/Pop band the Newsboys, who sold seven million albums worldwide with 27 number one hits. They have been featured in Business Review Weekly as among Australia’s top earning music exports. Peter has now ventured out on his own as a solo artist with his latest album being a worship album titled Peter Furler On Fire.

I had the chance recently to speak to the brothers who had met up again on Peter’s latest visit to Australia and asked them what it was like growing up together.

“Mark was violent,” grinned Peter with a chuckle, “Mark was the younger brother so when we were growing up I’d be taller than him, then two months later he’d be taller than me. Every time he was taller than me he’d take me on. We’d put holes in the wall at Dad’s house from fighting and wrestling. It was all in love of course, brotherly love.”

Mark relayed stories of their days at school when Peter had tried to start a revolution in rebellion to the strict school uniform of Bethesda Christian College. He didn’t like the drab grey pants and decided that if enough of them wore grey corduroy jeans, they may be able to change the school uniform. Unfortunately for him, the school was quick to act and Peter got the cane. Very quickly, his followers fled as they knew what was coming to them and the uniform protest was unsuccessful.

Mark also told me of how Peter and his friend once went walk-about during school time and a search party had to be called out to search for the boys in the surrounding hillside. With his love for life and adventurous spirit, it is no wonder that Peter ended up in the rock scene, belting out his passions through a microphone.

It’s not just all about the music for Peter though. It’s about the friendships he’s made along the way, the joy and the laughter that comes with writing songs with mates like Steve Taylor, Phil Joel and Paul Coleman. But most importantly, it’s about the message.

“Some people suck the life out of you,” says Peter, “and others leave you feeling encouraged. That’s like the two types of music. The Bible says ‘the power of life and death is in the tongue’ and that’s really how I see it. We all play similar chords, but it’s the words that come through that makes the difference and it’s the word that changes a life”. 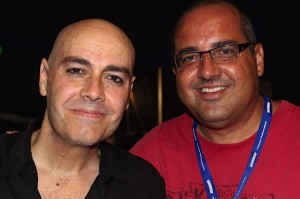